Xinjiang and the Uighurs: this can only end in tears

The Xinjiang region in western China has been repeatedly popping up on my news feeds lately, for more than one reason, so I thought it worth some digging to better understand what’s happening there.

First, some facts and history.   The Xinjiang Uygur Autonomous Region is one of China’s administrative divisions in the northwestern corner of the country; similar to, and adjoining, Tibet. It is a large area: 640,900 square miles, nearly one sixth of China’s entire land; however in the 2010 official census Xinjiang had a population of only 21.8 million, 1.6% of the country’s entire population. This is easily explained by the terrain, as much of the land is rough and/or mountainous territory. 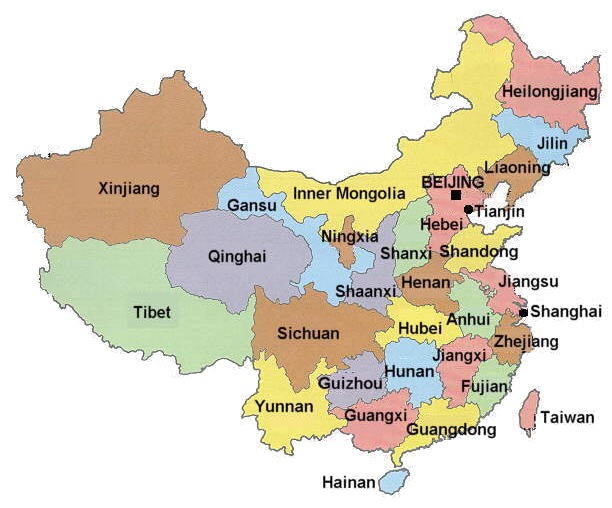 Throughout much of China’s history, China’s emperors had seen Xinjiang as a gateway for invaders into China. It even had a role in the final stages of the “Great Game” between the British Empire and Tsarist Russia in the 19th century, as Russia was expanding south and east through central Asia, Britain was trying to push it back from encroaching on India, and the Manchu Qing dynasty was collapsing in on itself. Russia and Britain discovered that Xinjiang, Tibet, Afghanistan and the other khanates in central Asia had scattered populations yet strong, cohesive cultures and religions which rendered them easier to take than to hold.

Throughout much of history, Xinjiang has been primarily a Muslim region, with a local population known as Uighurs. Their unique language and Islamic faith are key to their culture: prior to the Communist revolution in 1949, there were over 20,000 mosques in Xinjiang. But by the time of the Cultural Revolution, that number had dropped to under 500: the Communists were ruthless in suppressing religious observance. However, with the breakup of the Soviet Union, the newly-independent former Soviet states bordering Xinjiang have encouraged it to more aggressively assert its own independence. One result of that has been a dramatic upswing in Muslim observance: there are now over 25,000 mosques in Xinjiang (though admittedly most are secret). However, another result is that the Chinese government officials, keen students of history, have recognized the pattern and been taking action to re-assert Chinese control over the region.

In the meantime, another thing happened with dramatic consequences: the Industrial Revolution, bringing with it the need for large supplies of energy. Historically, China has been coal powered (and still largely is), but through the latter half of the 20th century their dependence on oil rose rapidly; and in the 21st century they have branched out into natural gas. And to further complicate matters, large reserves of oil and gas were discovered in the Middle East and central Asia during the latter half of the 20th century, reinventing their economies and making them strategic partners for China in its search for ways to quench its endless thirst for energy.

In the past 20 years, China has been rapidly making deals for oil and gas from Middle Eastern and central Asian nations, and building pipelines from them into the western part of China – right through Xinjiang, and with cities in the district as major terminus/distribution points for those international pipelines. There is the Kazakhstan-China Oil Pipeline, the Alashukon-Dushanzi Oil Pipeline, and three successive West-East Gas pipelines (with two more in the works). Ironically, in earlier times the famed “Silk Road” ran through Xinjiang, bringing spices and mercantile goods from China to the Mediterranean and Europe; now energy is the major commodity, moving in the opposite direction, and Xinjiang has emerged as a major, critical energy hub for China. What could possibly go wrong?

As I mentioned previously, after the collapse of the Soviet Union, the Chinese government was worried about former Soviet states in central Asia encouraging Xinjiang to act more independently. In response, it took a number of actions to increase its active presence in the region. First, it started encouraging Chinese from other regions to move there. To put that in context: China as a whole has a very ethnically homogeneous population, with over 91% being Han Chinese. In a country of 1.3 billion people, there are only 10 million Uighurs, and 80% of them live in Xinjiang. Since 1949, Xinjiang’s population has shifted from 83% Uighur to about 60% Uighur (and 40% Han Chinese). That is a dramatic influx of people, significantly diluting the local culture. Additionally, the Chinese government reintroduced the Xinjiang Production and Construction Corps, also known as the “bingtuan”. The bingtuan is a state-run paramilitary enterprise that sets up its own towns, with its own companies, schools, police, military units, and prisons. And of course it brings in its own people to live and work in bingtuan towns: almost exclusively Han Chinese. The bingtuan is not subject to local jurisdictions; it is run directly by the Xinjiang government (under tight control from Beijing) and the Chinese government itself. This scheme was started by Chairman Mao early in the communist regime, but was disbanded around the time of the Cultural Revolution as it was seen to be causing more harm than good to local harmony. But for more than 20 years now the bingtuan has been back in operation, creating a scattering of enclave settlements across Xinjiang. Of the 22 million citizens of Xinjiang, over 2.6 million live in bingtuan settlements, and they are 86% Han Chinese. They get the lion’s share of infrastructure investments within the region, and consequently they produce nearly 1/6 of the total GDP of Xinjiang. This is very clever work by the Chinese government: they have created their own “autonomous regions” within an autonomous region, and they are subverting the indigenous culture from within – eventually just replacing it on their current path. 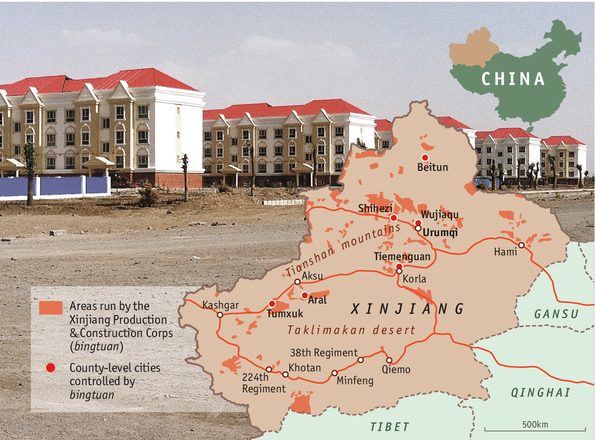 But taken as a whole, the Han Chinese living in Xinjiang – those living in the bingtuan and those who don’t – have a dramatically higher standard of living than the Uighurs. They are better educated (many having moved from other parts of China), they have better infrastructure by nearly all measures, and they have higher incomes. Further, the government is doing its best to suppress the Uighur culture: the Uighur language may not be taught in schools, and the practice of their Muslim faith is strongly discouraged. The Uighurs have some real grievances: the Chinese government has waged a prolonged campaign to stamp out their indigenous culture and overrun them with Han Chinese while keeping them in poverty.

What the Chinese didn’t count on was the extent to which the Uighurs would put up a fight. The mosques are going underground, there is private, secret schooling in the Uighur language, and of course, most notably, Uighurs have taken to terrorist acts to act out against the Chinese government’s heavy-handed approach to shoving Han Chinese culture down the Uighurs’ throats. And this war is escalating: the Chinese government, whose policy always seems to be “never give an inch” lest Tibet, Hong Kong and other districts start getting ideas, is further stepping up its tactics. It recently announced that it wants to forcibly relocate Uighurs from Xinjiang to other provinces in China, and to further accelerate the immigration of Han Chinese into Xinjiang. Notably, the government continues to refer to the troublemakers as “ethnic separatist forces,” which is a 25-year-old dog whistle for their past fear of Islamic agitators from other central Asian states who might encourage Xinjiang to try to break away from China. They even repeatedly suggest that the Uighur “terrorists” are affiliated with al-Qaeda, though there is little proof of such a connection. But while the government is counting on a forced dispersal helping to quell the violence, the opposite may be happening: Uighur-linked terrorist acts are popping up in more cities around China.

This is going to end badly, as both sides have shown themselves to be prone to violence, and neither side is showing any sign of backing down. In the final tally, however, I can’t see how the Uighurs win; the government has overwhelming economic and military power and no qualms about exercising it. The only weakness I see in the government’s hand, coming back to where we started, is that this is playing out in a region of the country that is a major energy hub for large parts of the country, and that hub manifests itself in thousands of miles of pipeline. The Chinese government has lots of soldiers, but nonetheless will have great difficulty protecting that entire pipeline as it crisscrosses the region. It’s a perfect target for a terrorism-minded group, and the Chinese government is doing its mighty best to piss off the local one. To be clear, I am in no way advocating for terrorism; I’m simply observing that there is a confluence of key infrastructure and violent unrest in the same region of China, and the consequences are both predictable and dire: if the Uighurs desire, they can cripple much of the energy infrastructure of China. They have not yet been targeting the nearby facilities, but I suspect it’s only a matter of time.

Posted by kevinsch on June 3rd, 2014 Posted in News
(Comments are closed)