A Rant about Measles

The CDC reported today that in the US we are seeing the highest levels of measles infections in 20 years. This isn’t just a tragedy. It’s a stupid, pointless, completely avoidable tragedy. I wrote recently about measles and the problems the anti-vaccination “movement” is causing through not only the spread of misinformation, but  more importantly the reduction of “group immunity” which protects people who cannot be vaccinated — either because they are too young, or because their immune system is already compromised. Measles is extremely serious stuff: the WHO estimated that worldwide there are 20 million new cases of measles each year, and 122,000 people die from it. 51 years ago, the measles vaccination was introduced. 14 years ago, measles was virtually eliminated in the United States, with cases reduced to noise level: isolated cases of people who acquired it while travelling abroad and got sick upon return to the US — but couldn’t effectively spread it to anyone else since practically everyone had been vaccinated and was immune. 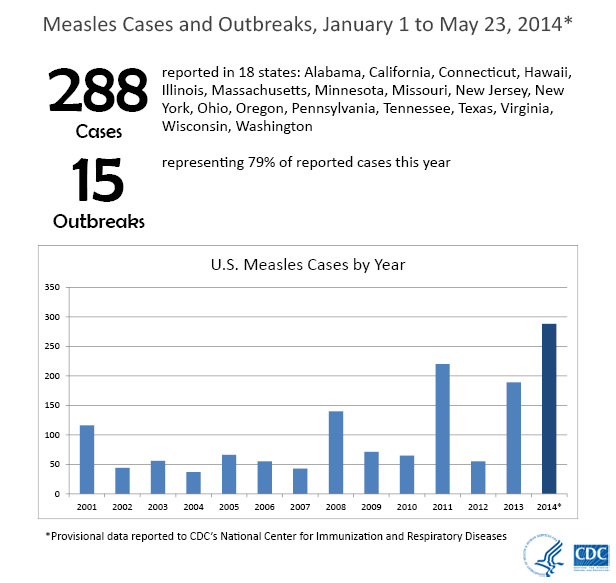 This year the CDC has already recorded 288 cases in 18 states. It is still being brought back from abroad (mostly the Philippines, where there is a nasty outbreak that has affected more than 32,000 people and killed 41) but now there are enough unvaccinated people here that it can spread.

And spread it does. People infected with measles are contagious up to four days before they start showing symptoms. Further, the measles virus spreads through the air, and can linger in a room for hours after a contagious person has been present. As this chart clearly shows, we have already far exceeded any recent year’s count of measles cases by this time of year, and the trajectory for the remainder of 2014 is frightening. 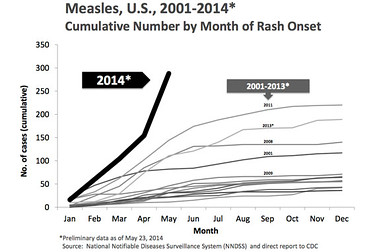 The largest grouping of measles cases in the US this year is in Ohio, in an Amish community. They give a number of different philosophical and religious reasons for not vaccinating their kids (though fortunately some Amish do in fact get vaccinations — yay!). So let me just say this bluntly: if your philosophy and/or religion suggests that you should avoid vaccinations, then YOUR PHILOSOPHY AND/OR RELIGION IS STUPID AND IT’S GOING TO GET YOU AND YOUR LOVED ONES KILLED. Plus, you and your loved ones are going to get other innocent people sick, and some of them are going to die too.

If you believe in a God, then you must believe that your God gave you your brain so that you could use it to make sound decisions based upon strong evidence. You must also believe that your God doesn’t want people to die unnecessarily from a completely preventable disease. It’s time to step up: get vaccinated, and get everyone in your family vaccinated.  The dark ages really sucked; let’s not go back there.

Posted by kevinsch on May 30th, 2014 Posted in Uncategorized
(Comments are closed)