Methane: you should be worried

When we talk about global warming, most of our discussion centers on carbon dioxide, a powerful greenhouse gas that human societies have been pumping into the atmosphere in increasing quantities since the beginning of the industrial revolution. But that is about to change: there is increasing consensus that methane is an even more serious threat.

To be clear: I’m not saying that carbon dioxide (CO2) accumulation in the atmosphere is not a threat – it most certainly is, and is contributing to global warming in real and measurable ways. And we need to deal with it. But recent developments – ironically in search of a “bridge to renewable energy” or at least an energy source that generates less CO2 – have increased the impact of methane production on our current and future situation.

Methane (CH4) is the second most prevalent greenhouse gas in our environment, after CO2. But methane is 28 to 34 times more powerful in trapping heat in our atmosphere than CO2. Like carbon dioxide, it is produced by a variety of both natural and industrial processes. The natural processes that produce methane include decay in wetlands, freshwater streams and lakes, as well as mammals’ digestion processes (including ours). But those are small potatoes compared to the anthropogenic sources, including decaying material in landfills, livestock and stored fecal matter in agriculture (also known as “enteric fermentation”), and oil and gas production. There are also well-known natural “sinks” for methane that pull it out of the atmosphere, including bacteria in soils (especially forest soils) and hydroxyl radicals in the upper atmosphere.

These basic facts about methane have been well known for decades, and governments (including the US) have been tracking methane production for a while. The current estimates by the EPA are that methane is approximately 9% of total greenhouse production in the US, compared to CO2 at 82% — but again, multiply the methane number by 30 and you see that it’s having a greater impact. 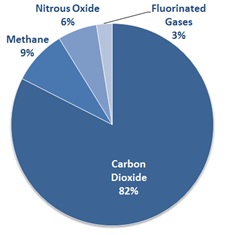 The EPA also estimates the relative contributions of different anthropogenic sources of methane. 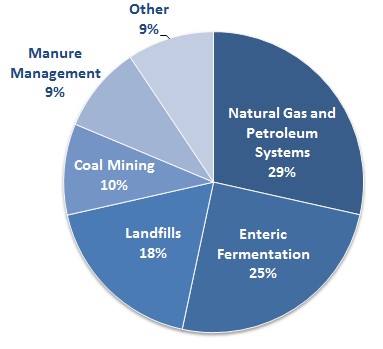 Let’s dive into one particular slice of this: natural gas and petroleum systems, which make up 29% of the total. Here’s what the EPA tells us has been happening with methane emissions since 1990: 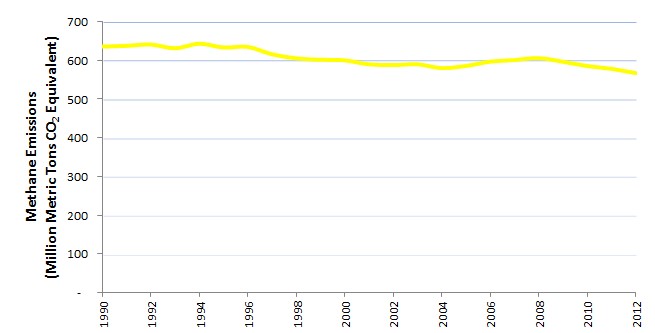 This looks like good news: methane emissions have actually decreased slightly since the mid-1990’s, mostly attributed to greener energy sources and to switching some of our energy production from oil to natural gas.

A momentary aside about natural gas: it’s mostly methane. When it burns, it reacts with oxygen to produce CO2 and water (H2O). So it still produces carbon dioxide, but 43 percent less than coal and 30 percent less than oil – and as mentioned previously, the CO2 is 28-34 times less powerful as a greenhouse gas than the methane was. It’s not clean, but it’s cleaner than the two leading fossil fuel alternatives.

There are some important caveats here: first, the natural gas needs to burn efficiently; if not then, it’s releasing methane directly into the atmosphere. Second, the whole production line to get the gas from it source to the furnace, known as “well to burner tip,” needs to be efficient and, most importantly, leak-proof. And that’s where our story starts to get very interesting.

The EPA’s methane emissions estimates are based upon a “bottom-up” approach of testing representative equipment on the ground and then scaling those readings up to account for the totality of equipment in use. They haven’t done the work to measure actual methane levels in the air and correlate them back to sources to ensure accuracy of their estimates. And in the last year, there have been several research studies, some of which include “top-down” empirical tests, that suggest that the EPA’s numbers significantly underestimate the amount of methane being released – particularly by the oil and gas industry.

There are some specific sources that have been identified as major contributors. The first is simply leaky equipment: if natural gas pipes aren’t sealed correctly, they can release large amounts of methane in a very short time. The second is drilling sites, including traditional oil wells, shale oil, tar-sand oil, and natural gas and hydraulic “fracking” drilling operations.

Late last year the official reports started showing that the mix of greenhouse emissions was shifting in states with significant shale oil and gas operations, with decreased carbon dioxide and increased methane. A Harvard research group then followed up with a top-down study of methane levels in the air, and found they were significantly higher than the EPA’s estimates, particularly around oil and gas operations. In February, a study by Stanford, MIT and the Department of Energy confirmed those results – specifically, that there was a lot of methane leaking out of oil and gas production facilities. In April, a further study by Purdue, Cornell and others not only re-confirmed those results, but added a new surprise: some oil and gas drilling sites had surprisingly high levels of methane in the air surrounding them – 2 to 3 orders of magnitude higher than expected. Past work had led to the belief that drilling sites themselves were not particularly “leaky” but this is truly an astounding level that can’t be accounted for by a simple leaky pipe somewhere in the works. It’s well understood that in fracking operations during “flowback” when the fracking liquid is pumped back out there can be methane discharges, but in the April study it was confirmed that flowback events were not the source of methane releases.

(another interesting aside: in researching this piece, I came across FracFocus, a repository of disclosure information on fracking activity that many states are using)

So we now know that the oil and gas production process is emitting large amounts of methane into the atmosphere, much more than was previously thought, and some of it is coming from parts of the system that were not previously thought to be contributors. We still have much work to do in order to understand why this is happening. There is the real possibility that it is either unpreventable or unfixable; in which case the belief that switching from petroleum to natural gas as a “bridge to renewable energy” will no longer be tenable – and some are already saying that. But hopefully that won’t be the case, and our better understanding of the importance of top-down measurements of methane emissions will give us important tools for locating methane leaks and addressing them quickly. Apart from the environmental benefits, the United States has substantial deposits of natural gas, and the possibility of having true energy dependence from the Middle East, Russia and other petro-oligarchies could have a substantial positive effect on the country’s foreign affairs.

Last summer, before the revelations about the under-reporting of methane emissions, the White House announced that they were concerned about methane’s contribution to global warming and were working on a strategy to address it, looking at landfills, coal mines, agriculture and oil and gas. This spring, the EPA is expected to start working on additional regulations. Let’s hope they move quickly, because we may not have much time.

Posted by kevinsch on May 29th, 2014 Posted in Environment, News, Science and Research
(Comments are closed)